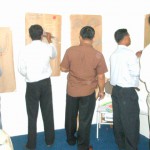 People with psychotrauma usually find it difficult to talk about the terrible things that happened to them. Children, of course, are too young or not yet able to express themselves in words. In such cases, non-verbal art therapy methods – like drawing, painting, music, dance and theatre – are very helpful. Art therapy is not as much culture or language based as verbal therapies, which means it can be used anywhere in the world.

For example, the art psychotherapist can ask for drawings of the past, present and future, or for ‘helping pictures’ that might help the person get out of a problematic situation, the. People will never be asked to visualise terrible experiences, but sometimes they do so of their own volition.

Women, men and children carrying out art assignments will – often unconsciously – confront their suppressed feelings of anger, impotence, shame or guilt. This enables them to go through those emotions again and learn to cope with them.

Talking alone will usually remain limited to the facts, to what the person thinks and knows. Art therapy is also about raising emotional awareness.

Drawing, drama or musical activities can lead to a catharsis, in which fear, rage and tension are released, but that alone is not sufficient. It is vital for people with psychotrauma to ultimately be able to tell the story of what happened to them, in pictures as well as in words.

‘We had not been to school for a very long time because shooting had been going on. One morning, however, we did return to school. The teacher allowed us to make drawings about what had happened. Everyone could say something about it, if he felt like it. I told them that my father had been taken away, because that is what I had drawn about. More fathers had been taken away. No one liked that. Then some children had to cry. We stuck all the drawings together on a big sheet of paper and hung it on the wall. It had become very beautiful. Many people came to look at it, who also thought it was beautiful. I think my father would find it beautiful too.’
Angola, Boubacar, 8 years old

Would you like to know more about the use of art therapy in conflict and disaster areas?

Then read the article ‘Art therapy for mental health workers in areas affected by violence: a rarely explored resource’.